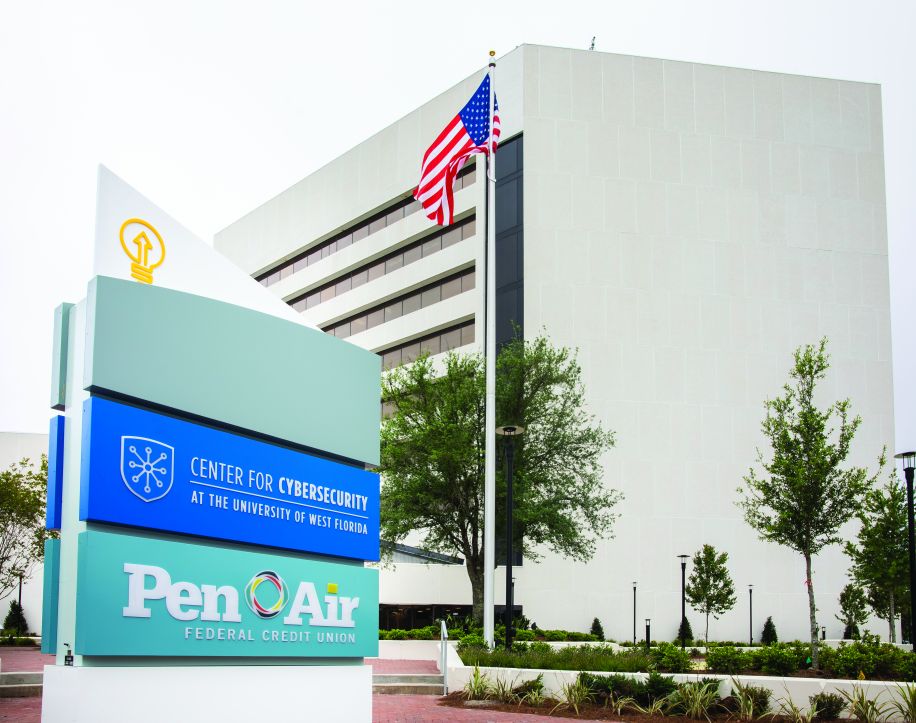 Glass walls, electronically locked doors, surveillance cameras and massive monitors greet visitors to the second floor of the Studer Community Institute Building in downtown Pensacola. The scene looks like the set of a covert spy movie – and it is the new home for the Center for Cybersecurity at the University of West Florida.

The overt location visually enhances the Center’s not-so-secret mission to propel Pensacola into the CyberCoast, a national hub for cybersecurity business and workforce development. Moving downtown further connects the university’s education and training resources to the existing cybersecurity community and those who want to pursue a cyber career through degree and non-degree options.

Florida ranks sixth in the nation for total cybersecurity job postings according to CyberSeek. There are 13,465 unfilled jobs statewide and more than 3,000 of those are located in Northwest Florida. Closing this gap as a national leader in cybersecurity education and training is one of the Center’s main goals.

The Center is a technological emporium which includes two innovative spaces dedicated to security operations and critical infrastructure security training. In addition to one of the nation’s only educational Security Operations Centers (eSOC), the Center features a 30-seat Cyber Operations and Security Training (COAST) lab and the Cyber Innovation Area (CIA) which is used for collaborative problem-solving and partnership development. The surrounding glass allows visitors to peek behind the curtain as faculty guide students through their lessons.

These tools form the backbone for the Center’s scenario-based, hands-on, competency building approach. 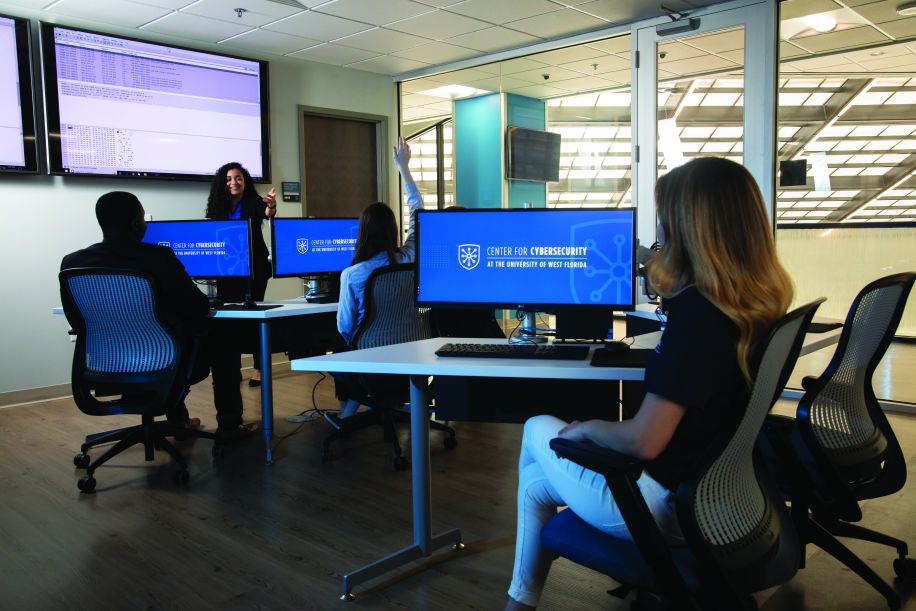 This fall, the Center publicly launched its Cybersecurity for All program to build upon the university’s nationally recognized degree programs. Multi-day classes cover topics at a range of skill levels. Technical students can enhance their skillset in network defense, malware analysis, cloud security basics, incident response, industrial control systems and SCADA security. Non-technical students like managers and business owners can start with cybersecurity fundamentals and risk management courses. The program also includes a course for test preparation for the CompTIA Security+ certification.

Courses qualify for CEU/CPE credits, and individuals from all backgrounds are encouraged to pursue training like this to protect national interests and establish a baseline for cyber awareness.

For the past two years, the Center has delivered training to the recently renamed Florida Division for State Technology within the Department of Management Services and Florida Department of State. Approximately 93 percent of these students rated the courses as useful and would recommend to others.

Since its on-campus launch in 2014, the Center for Cybersecurity led a rapid effort to obtain certification as a National Center of Academic Excellence (CAE) designated by the National Security Agency and Department of Homeland Security. UWF achieved this prestigious designation in one year and was asked to serve as the CAE Regional Resource Center for the Southeast, one of eight such centers across the U.S. In this role, UWF supports all colleges and universities in Alabama, Florida, Georgia, Mississippi, Puerto Rico and South Carolina to enhance cybersecurity education and obtain CAE designation.

The University of West Florida offers the only NSA/DHS CAE designated standalone Bachelor of Science degree in cybersecurity in Florida. This program launched in 2018 and attracted hundreds of students to the major, which covers a broad spectrum of cybersecurity subjects.

“We are even exposed to more niche topics, such as reverse engineering malware and industrial control systems security,” said Zachary Mingus, a B.S. Cybersecurity student and president of the UWF Cybersecurity Club. “Graduates of the program will be fully prepared to pursue any path within the world of cybersecurity that piques their interest, from an analyst position in a Security Operations Center to penetration testing as a white hat hacker.”

Megan Morton has been a Cybersecurity Ambassador since last year. “It’s great being able to talk to children who are genuinely interested in cybersecurity and enthusiastically asking you questions about it,” she said. Megan also thinks that being a part of the team has been valuable for her own experience. “Being a Cyber Ambassador has given me so many opportunities that I otherwise would not have had.”

“Through the generous support of partners like AT&T, our ambassadors can reach out to more schoolchildren and present this rewarding career with its career-wage jobs,” Guy Garrett, assistant director for the Center and the ambassador program coordinator. “This year we will place additional focus on promoting cyber careers in more diverse areas. Women and minorities make up only 15 percent of the cyber workforce combined. We want to improve that number.” 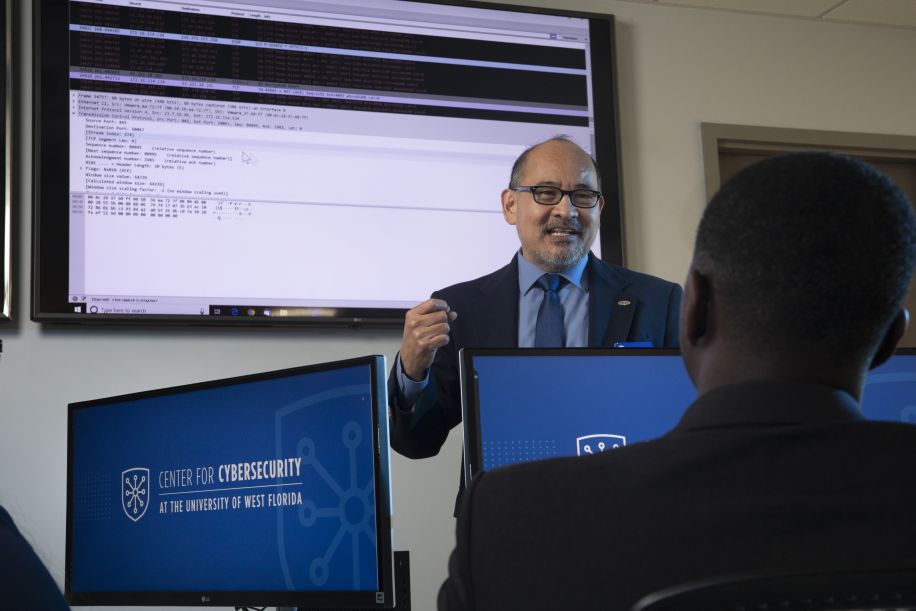 In May, Dr. El-Sheikh took the Center’s message worldwide, speaking at the NATO Defence Project Conference held in Portugal.

As the influence and capabilities of the Center grow, so does its team of experienced professionals. During the past year, four faculty members and a new director of communications and public relations joined the team. The latter position was filled in August by ITEN WIRED director Jim Rhodes, who previously worked for AppRiver, one of the area’s most successful start-up IT and Cybersecurity ventures.

Carson Wilber is a senior undergraduate student in Computer Science, Cybersecurity and Mathematics at the University of West Florida, president of the AI Research Group, a member of the Cybersecurity Club and a UWF Center for Cybersecurity ambassador. He volunteers for community initiatives across the panhandle, represents various academic nonprofits, and co-founded INERTIA Education Programs, Inc. to bring high-quality afterschool STEM programs to underserved schools in Escambia County. He also owns Wilber Tech LLC, a digital branding, media, and marketing firm in Pensacola. Carson attended ITEN WIRED 2017, spoke at the summit and on ITEN WIRED Radio in 2018, and joined the planning committee this year.