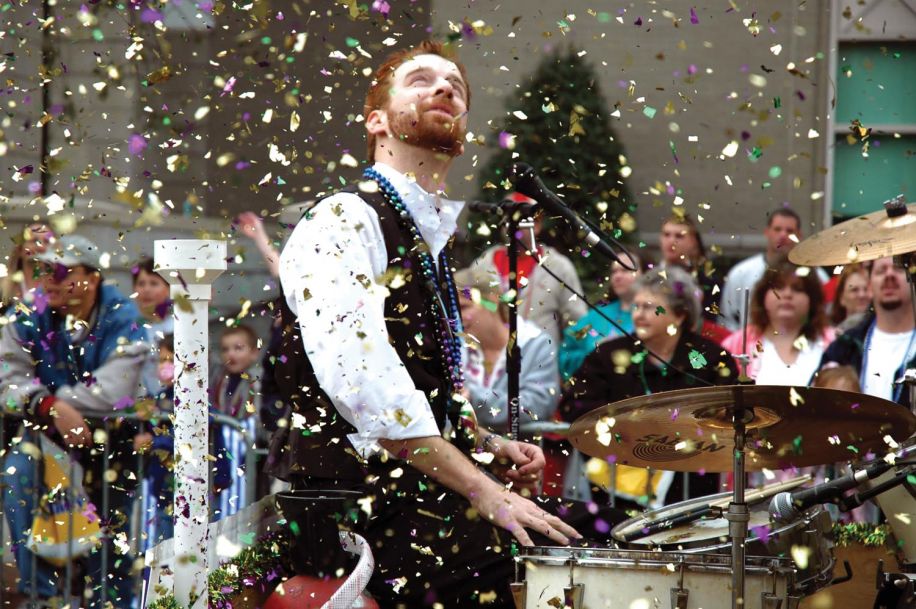 It’s time for Mardi Gras, and we’re not just talking about that one day out of the year when we celebrate by catching the traditional moon pies, beads, and other surprise throws from dozens of decorated floats manned by costumed krewes cruising through the Downtown crowd. Mardi Gras is its own season beyond Fat Tuesday, and the season will kick off in Downtown Pensacola on Jan. 8.

For five years, the annual Mardi Gras Kick Off has been sponsored by Wind Creek Casino & Hotel and organized by the small group of volunteers at Pensacola Mardi Gras, Inc.

According to Danny Zimmern, president of Pensacola Mardi Gras, gathering info for the event is a year-round experience and planning starts about six months in advance. Pensacola Mardi Gras works with the City, as well as Escambia County Sheriff’s Office and local Downtown businesses to make the event a safe success.

The kick off begins at Seville Quarter and a second line band takes participants and krewes through Palafox, Garden, Government, and Tarragona streets.

For five years, the New Orleans Ramblers (led by Tim Jackson) have lent their musical talent to Pensacola Mardi Gras for the second line procession. Although the band plays traditional New Orleans funk and other music inspired by the sounds of the Big Easy, they’ve performed all along the Gulf Coast, which is why their band slogan is “conceived in New Orleans, born on the Gulf Coast.” For more info on the band, check out neworleansramblers.com.

The Mayor officially kicks off the Mardi Gras season at Seville Quarter by cutting the King Cake, which is supplied by Oh Snap! Cupcakes & Gourmet Bakery—one of the event sponsors. The cake is large enough for every member of the crowd to get a slice.

Other special guests who are scheduled to appear at the cake cutting and kick off include Knights of Columbus and the chair of the Board of County Commissioners.

After the cake has been cut, all krewes and their accompanying floats will be “blessed” for the season. After each blessing, the krewe will join a processional led by the New Orleans Ramblers.

The kick off is free to attend and, unlike other parades, Pensacola Mardi Gras celebrations are family friendly and open to all ages.

Pensacola Mardi Gras maintains communication with at least 80 krewes, many of which have already signed up for the kick off event.

Some of the krewes operate as 501(c3) nonprofits, or they aim to bring awareness to charities, such as Manna Food Bank and Pace Center for Girls. Other krewes like the Krewe de Yayas try to get the word out about important issues, such as breast cancer awareness.

If you’re interested in joining a krewe, their floats will be parked on the streets surrounding Seville Quarter on the day of the kick off. Get to know the krewes and their causes, in case you’d like to join the fun, build communal connections, and help out a good cause while you do.

“We love the sense of community and energy felt each year at the annual kick off and parades,” said Danny Zimmern. “Last year, the sheriff’s department reported that the kick off alone drew a crowd of about 6,000 people—excluding the krewe members.”