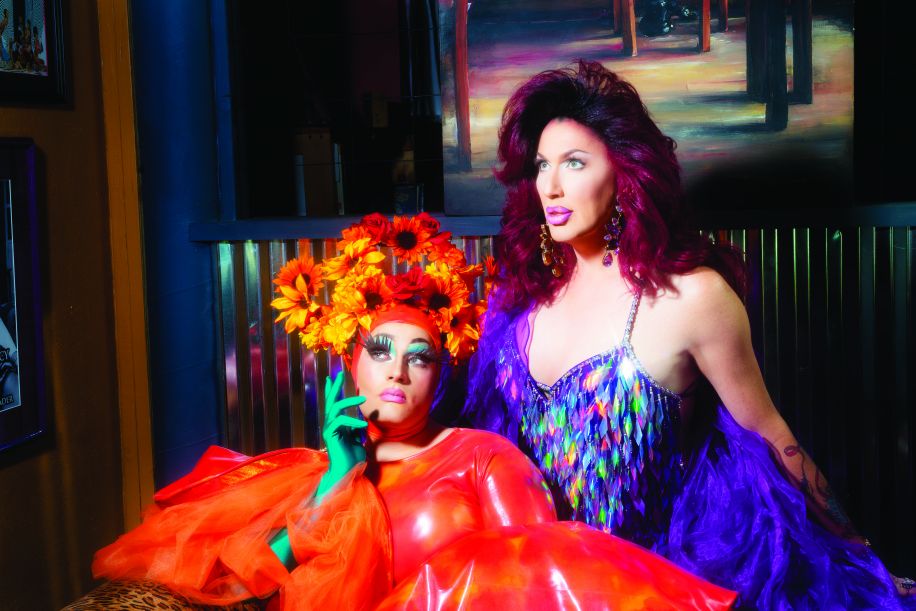 Once upon a time, one of the best parties in town was held in a huge white building on Wright Street. It was a bar that took up “the entire block” and was a popular destination for anyone and everyone looking to have a good time. Inside, a stage rose up over the crowd, entertainers would host some of the most extravagant shows you could see in Pensacola. Then, three years ago, the bar closed its doors for good and the roar of the shows faded away. The bar? That was Emerald City. The entertainers who put on the best parties in town? They were the drag queens that ruled the stage. And they haven’t gone anywhere.

“Other people contact us here because it’s growing. It’s changing, but it’s growing,” Paul Dye, owner of The Cabaret bar on Jefferson Street, said, and in the past few years, he’s seen that change happen.

Drag queens can trace their origins back to Shakespearean times, when female actors were not allowed to perform on stage. Male actors would portray female roles where their long dresses would “drag” along the ground. Who knew Shakespeare would lead to such a great party?

Nowadays, drag queens have taken up a slightly different role, but their roots are still in the theatrics. Although drag queens are often associated with gay culture, not all queens are gay men, and not all gay men participate in drag. Instead, 30-plus-year drag queen veteran Lauren Mitchell describes her work as just that – work. She is a career entertainer.

“You’re on stage, you’re entertaining,” Mitchell said. “Entertainers encompass everything from street mimes to rock musicians to poetry slams down at Sluggo’s. If you’re doing something that is entertaining a crowd and you’re getting paid for it, you’re an entertainer.”

As entertainers, drag queens use the theatrics of their costumes, make up and acts, whether it be lip synch battles or comedy skits, to perform for an audience. Part of their act can be rooted in something deeper than just feeling a need to entertain. Just as a musician may cite a love of music as her reason for performing, drag queens can find a love of themselves and a want to express themselves in their art.

Although a relative newcomer, Terrah Card has been performing professionally since 2017. She said part of the appeal of dressing in drag is how it makes her feel. Typically an introvert, when she’s on stage and performing, she has to be an extrovert. Her act and her costumes makes this a bit easier for her.

“When I’m in drag, I feel a lot more confident, and I feel like I look cooler in general,” she said. “Some of that has transitioned into my life; I’ve gotten a lot more confident in myself. It’s helped me find a little passion in my life, to be creating something, making people smile while I’m having a good time.”

Entertainment and art in Pensacola have always been an eclectic and thriving market. Between the “Big Five” arts organizations, the support of local artists at events like Gallery Night and more eccentric support such as Graffiti Pizza’s graffiti wall, it’s no wonder there’s been a place for drag shows in the city. Emerald City became the heart of drag while it was open, but it certainly wasn’t the first and only place you could stop in to cheer on the lovely queens of Pensacola.

While neither Card nor Mitchell can claim to have been the first drag queens in the city, the drag scene in Pensacola doesn’t quite reach back to the Globe Theatre. In the 1980s, Pensacola had several small gay bars. Only a few of them would host drag shows, meaning often times there were more performers than shows. Being a drag queen was a hobby or a job at best in Pensacola. There wasn’t enough of a market for anyone to make a career out of doing drag, yet.

In New York City, the late 1980s saw a drastic increase in the public appearance of drag queens. More and more performers rose into prominence and performances were common enough to gain significant attention. Soon enough, the national market caught onto the trend, with Pensacola being no different. Going into the early 1990s, more and more bars began offering drag shows. Still, it was mostly contained to gay bars and LGBT-affiliated venues, but the seeds of a great empire were started.

A bar on Wright Street, then known as The Office, was one such place you could go to see a drag show. Mitchell described the low of the drag scene occurring when entertainers employed by The Office walked out of work due to mismanagement and drama within the company. The Office had been one of the main venues for drag shows. It looked bleak that any other place would take up the torch. Then, The Office closed. In 1997, the bar would reopen one more time under a new name: Emerald City.

Mitchell, once an entertainer at The Office, returned to the Wright Street bar to try her luck under the new banner. Within only a few years, Emerald City established itself as the premier place for drag shows.

“You couldn’t touch us on that stage,” Mitchell said. “We’d have people come in from other cities and just be blown away. People from Pensacola would go somewhere and come back and say ‘Oh, we missed y’all.’ There’s some fantastic entertainers out there. But when it comes to having a full, together show, that’s a big deal.”

Although the largest venue for drag shows, other bars around Pensacola continued to offer shows as well. The Roundup and The Cabaret both offered drag shows with the same mentality that carried over from before Emerald City: they offered something different. Yes, they were still drag shows, but while Emerald City was all theatrics and production, the other bars offered something for different demographics. Looking for more leather in your show? You went to The Roundup. Just looking for a more casual show? The Cabaret was probably where you went. You want something else? Another bar catered to whatever your tastes were.

“We all worked together on different nights to offer different aspects of the LGBT culture,” Dye said, then he frowned. “I don’t like using that word. ‘Culture.’ But that’s what we did. 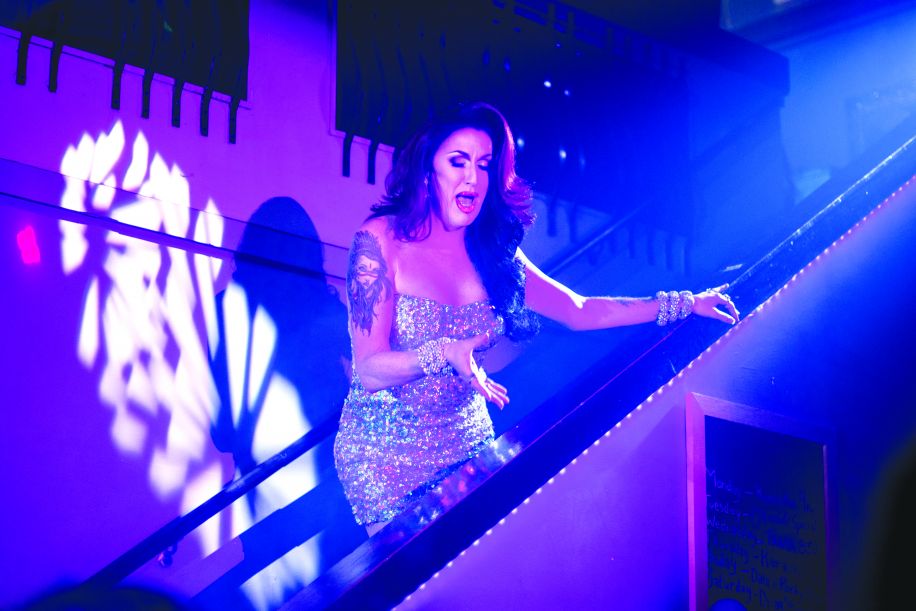 “It’s very much an old school cabaret,” Dye said when describing the shows at The Cabaret. “It’s a floorshow. Sometimes there’s live mike singers, sometimes there’s comedians. There’s a large array of acts. It’s on the floor, next to you, it’s very interactive. Emerald City was more focused on the nightlife. It was a lot of dancing, high-energy stuff.”

At the height of its popularity, Emerald City was still just one of many places you could go to see a show. In time, the bar grew and grew, incorporating different portions of the larger building as other businesses vacated the spots surrounding it. The huge venue attracted huge crowds for its weekly Drink and Drown specials in conjuncture with the drag shows, but business steadily fell on the other nights. The bar was empty for most of the week. The leadership team fought. At its very height, Emerald City began to tarnish.

Within a couple of years, in 2016, Emerald City closed its doors for good. It was a sudden closure. A soured partnership led to a dispute between the three co-owners of the bar that was unable to be resolved. The community reeled at the loss of such a fixture in the LGBT scene. A Facebook post left some with the hopeful message of “there is a possibility that we will re-open under new ownership.” This never came to pass, and Emerald City has faded as a legend among the drag queens in Pensacola.

While some hold out hope for another Emerald City-like venue, Dye said he finds it unlikely something will open up again. The demand isn’t there for something like Emerald City anymore.

“The industry has gotten smaller. There’s no need for big, complex clubs,” he said.

After having worked at Emerald City for nineteen years, Mitchell expressed her own disappointment at the loss, but has found something sweet amongst the bitter feelings.

“The only thing I miss is the actual stage, and my own little personal dressing room,” Mitchell said. “But the Cabaret has been fantastic. I go in, we do our show, the crowd is respectful, they’ll move out of the way, the money is phenomenal, it’s great. I just worked at the Roundup Sunday, that was phenomenal. Everyone is so receptive to the shows and I think it actually might be a little bit better of a thing. More girls are working because it’s not just one big venue where everyone goes to see one show. Now you’ve got shows everywhere so there’s an opportunity for everybody to work. So I think it’s actually a little better.”

Today, the drag scene has come to rather poetic full circle. Multiple venues offer smaller shows, though the number of shows and venues has increased dramatically since the 1980s. The scene is not as much scattered as it is varied. Acceptance of the LGBT community has offered more opportunity for drag queens, and the increased demand has seen unconventional venues open to the idea of shows. Ironically, those suffering most in this era of equality, are those venues that first nurtured the fledgling drag and LGBT scene.

“Growing up in my generation, the gay bar was your safe place,” Mitchell said. “You were safe, you felt comfortable, you could be who you are. The kids growing up now, the millennials, they don’t care. Their friends don’t care. They go everywhere. You can’t go to a bar downtown now that isn’t mixed. So now there’s no loyalty of going back to that bar that was your safe spot.”

The time of Emerald City bars has gone, but in its place, people can more easily find the show they’re most interested in. From old classic shows at The Cabaret to new shows offered at the ice cream parlor Dolce and Gelato, there is still a demand for performances, but the atmosphere has changed. The definition of a drag queen and a drag show has expanded.

“Anyone can do drag. Drag is a platform for everyone,” Card said. “It’s better than what it was because people are more accepting and open of different things. It’s not as different anymore.”

While Emerald City is remembered fondly, Dye, Mitchell and Card all agreed that what Pensacola has isn’t bad. It’s different, it’s changed, but it’s better. The drag scene didn’t die with Emerald City. It simply outgrew it. The talent in Pensacola has found ways of expanding beyond what was once offered to what is possible now in the city and beyond.

For newcomers like Card, the growth of the drag scene has become an opportunity for personal and professional growth. You can be an amateur and climb up to be a professional, and in fact, you’re rewarded for taking that journey.

“When you start off already at a ten, what makes people excited for performers is they want to see you grow up and progress, see how much you’ve changed in a year,” Card said. “When you’re already starting up here, okay, what else are you going to do to impress us more?”

If anything is certain, it’s that drag shows will change, they may grow and they will absolutely evolve, but seriously, have you seen what a drag queen can do in stilettos? Pensacola’s queens have earned their place in the city’s eclectic art and entertainment scene and they’re here to stay. 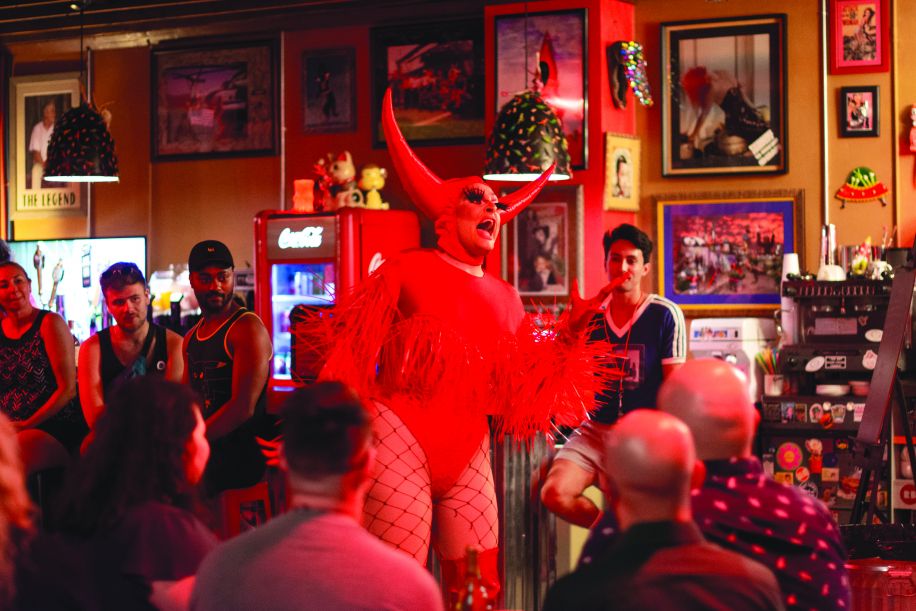