Meteorologists: the only people who can be wrong all the time and still get paid. While that old joke may not be entirely true (between 60 and 70 percent of weather predictions are fairly spot-on), it reflects a sentiment that a large portion of the population shares; namely, that you can’t trust the weatherman. But what if there were a way to boost accuracy to north of 90 percent—even 95 percent—with specificity down to the square-mile or square-block?

One organization in Ft. Walton Beach, Fla., is planning to do just that. In late August, the team unveiled for the first time its revolutionary new technology—developed by the military and purchased for exclusive civilian use—that detects every critical characteristic of an impending hailstorm, flood, tornado and hurricane. Using a combination of raw data from NOAA (National Oceanic and Atmospheric Administration), the National Weather Service and more, with a thousands-strong network of individual data points, meteorologists at the National Storm Center (NSC) can often predict weather for precise addresses and parcels, and alert homeowners about the incoming storm crisis.

“What we developed is a 24/7/365 next-generation forensic weather-reporting monitoring system featuring geo-targeted coordinates with more than 95 percent accuracy,” said Trevor Leeds, NSC’s CEO. “We can monitor any home or property in the world, right down to its exact address.”

Instead of using algorithms that often lump data together and miss smaller, more individual storms, the NSC collects critical storm information and weather-mapping reports (over three million a day) so its staff can scan all storm data in real time. This means that a highly trained human eye can detect a minor tornado that may be missed by a National Weather Service algorithm, and that individual can then issue a precise warning. No more countywide thunderstorm warnings. No more mass alerts. Instead, this targeted, highly accurate system can say with confidence who will be affected.

More accurate alerts mean that more people will pay attention. With our current weather-prediction system, people will generally ignore warnings because they have not grown accustomed to having faith in reports. But now, individuals will be able to understand exactly when and where severe weather will strike, leading to better precautions and possibly saved lives. 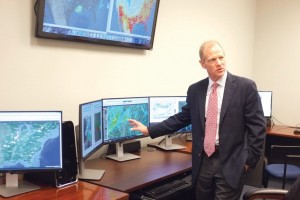 Dave Carlson is the founder of the NSC and has spent the past 18 months procuring the software, recruiting top PhD meteorologists and building partnerships with future customers like insurance companies, alarm and home-monitoring organizations and contractors.

“This technology has so many uses and we’re excited to roll it out and really change how weather prediction happens,” said Carlson. “We want to make sure your family members will not be in danger.”

The military program that Carlson purchased is a browser-based computer system, meaning meteorologists can even access it from the road or when a storm takes out one of their three central hubs in Ft. Walton, Fla., Texas or Colorado.

“Anyone can perform functions in the program,” said Josh Cahall, a lead facilitator with the NSC. “You can select different attributes that you want to look for and set different thresholds for warnings. Some consumers may want a warning for a minor hailstorm, others may only want to be alerted of a tornado or hurricane. You can export that information to Google Earth for specific locations and make predictions in real time.”

This emphasis on accuracy above all else comes from the group’s military background, where troop formations and infantry movement is often dependent on only the most precise weather information.

“When you’re doing this for the military, you can’t be wrong,” said Jay Southerland, CEO of international operations.

One of Carlson’s first hires was Roco Calaci, a meteorologist who has worked with NASA and the White House and helped develop the technology for the NSC based on the military’s skeletal computer system framework.

“We bring in raw data such as satellite information, weather information, and weather stations reports, and using military-trained weather forecasters, we look at the data and make smart predictions,” said Calaci.

But why are public organizations not better at predicting the weather? The National Weather Service, for example, is not able to provide this level of accuracy because their charter does not allow for site-specific alerts. They also deal with budget constraints and simply do not have the manpower to track all severe weather events. In addition, many hailstorms, high winds and tornados fly under the radar, so to speak, and are too small to be picked up by their algorithms.

“And a lot of weather organizations won’t issue a warning until they have some sort of visual confirmation,” said Carlson. “By then it’s too late. We save lives by more accurately predicting severe weather, instead of telling you a tornado has touched down after the fact.”

The NSC technology, however, has no such constraints, and Southerland sees endless possibilities for the technology.

“Right now, we’re going to be a mainly business-to-business company, but in the next six months we’re going to begin marketing to individual consumers and even release a mobile phone application,” said Southerland. “We’re also starting a pilot program in Australia soon to take this worldwide.”

The NSC recently announced a partnership with SkyBell, a company of WiFi video doorbells that will come equipped with temperature, pressure and humidity monitors. This of course means increasing the number of national data points from a few thousand to a few million.

“This partnership will provide more accurate weather to all,” said Desiree Mejia, CEO of SkyBell.

“The NSC brings a level of education, information and resources to a property owner after a storm, and it connects them to licensed and certified contractors so they’re not being taken advantage of by storm chasers or an insurance carrier who attempts to reduce the amount of their claim or deny it altogether,” said Leeds.

Also part of the NSC’s plan for reinventing the meteorological game is coordinating with response teams to more quickly mobilize help and alert building material suppliers of what will be in demand when.

So how much is this all going to cost? The NSC is a for-profit company, after all. They have a lot of costs to cover, including the recruitment of more than 70 meteorologists over the next six months, the construction of three prediction hubs throughout the nation, and the military program they had to purchase for presumably several million dollars. As the NSC is primarily business-to-business at the moment, Leeds said that the cost to some consumers might be nothing at all.

“Some insurance companies will buy from us and include that in their policy plans,” said Leeds. “Same with home security and home automation subscriptions.”

For customers who do decide to shell out money for a traditional subscription, Carlson promised the fee would be nominal.

“We haven’t worked out a specific pricing structure yet, but we’re thinking $2 or $3 a month,” said Carlson. “We don’t want this to be a thing just for the elite. We want everyone to be in the know and be able to protect his or her families. We’re also planning to give the service to school districts for free.”

As one might expect, there are lots of differences in outcome between some of the NSC’s predictive models and the more traditional weather outlets. One weather system that was sampled showed heavy hail according to more traditional outlets, but absolutely zero hail in the NSC’s models. The NSC claims their models are far more accurate, but what happens with the five percent of time they are wrong?

What if, for example, an insurance company has contracted with the NSC to give the service to their customers? Seeing the NSC report that there is no expected hail, the customers decide not to move their car under an overhang. However, the NSC model ends up being wrong and the car is severely damaged. Who is liable?

The NSC’s lawyer, Brad Hakala, said they have worked out liability arrangements with their customers and that they are fairly certain through beta testing that the organization will not be on the hook to pay.

“We simply provide information; we don’t tell people what to do,” said Hakala. “We clearly outline our liability in our terms and are certain it shouldn’t be a problem. That’s one of the reasons the accuracy of this model is so exciting.”

Carlson hopes to change the meteorological industry by recruiting the best and offering pinpoint accuracy for large and small systems alike. He promises more rollouts in the next few months that will further change predictive weather.

“It is highly probable that we will save lives and be able to mitigate storm-related damage,” said Carlson. “By being highly accurate, we can stop the wolf-crying tendency of modern weather news organizations and deliver information that you can bet on.”