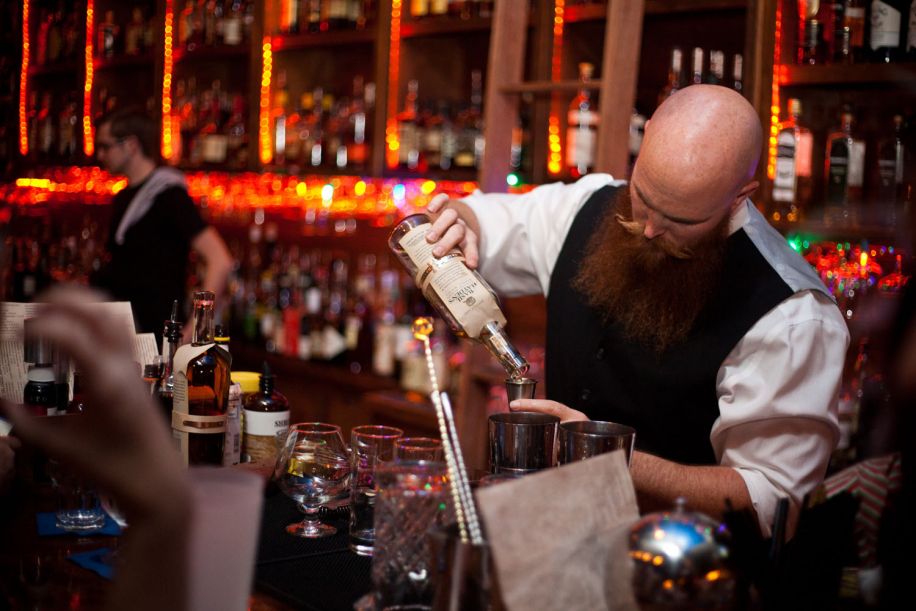 What’s all this whiskey business? It’s been called the water of life and writer’s blood, thanks to its consumption by famous writers like Hemingway and Twain, and there’s even variations on the spelling of whisk(e)y depending on its origins. Downtown Crowd caught up with Katie Garrett, one of Pensacola’s whiskey experts and owner of Old Hickory Whiskey Bar, to talk turkey about whiskey. She laid out a map to the wonderful world of whiskey, taking us from ways to enjoy whiskey and its many forms to why the whiskey path doesn’t have to be risky business, especially for those with a picky palate.

Whiskey Categories
“Basically, all whiskeys must be made from a grain,” said Katie. “The type of grain and how much was used in making the grain mash determines the category of whiskey it falls under.”

Whiskey comes in all shapes and sizes. By legal definition, a drink is classified as a whiskey if it was made from a fermented grain mash and (if it was aged) it should be aged in oak barrels. The level of alcohol varies between types, but ranges from 40 to 68 percent ABV (alcohol by volume).

Bourbon contains corn, scotch is made of malted barley, Irish uses malted and un-malted barley, Tennessee is similar to bourbon in that it uses corn but differs in its filtering process, and it goes without saying what grain you’ll find in rye whiskey.

However, the world of whiskey is constantly changing. Whiskey makers from around the  globe are currently experimenting with nontraditional grains, such as rice and quinoa to produce new variations on grain mashes.

Whiskey and Age
“Age is just a number with whiskey and life,” said Katie. “Age doesn’t determine quality. If you like an oaky flavor, then go with an older whiskey. If you don’t like the oaky-ness, then stick with something younger.”

Did you know? Whiskey that has not been aged is clear colored and called moonshine, white dog, white lighting, etc. Since the term has gained negative connotations as an illegal concoction, stemming from its widespread distribution during Prohibition, many refer to moonshine instead as simply un-aged whiskey.

Older whiskeys tend to keep strong notes of the oak barrel they were aged in, while younger whiskeys tend to have a smoother, less oaky taste. This is because over time, as the barrels heat and cool through the seasons of summer and winter, the liquid inside the barrels expands into the wood then compresses, taking with it traces of the wooden barrel that housed it.

Today, distillers and warehouses are using different parts from oak trees to determine what sections of the tree make for the best barrel and taste.

Whiskey Drinking
“There is no wrong way to drink whiskey,” said Katie. “You drink it how you want it, which is how you like it. Sample and experiment to find out what you like and don’t be afraid to try something from every category, even if you’re a little scared to.”

Ideally, if you’ll be sitting with a dram of whiskey, then your first sip should coat your mouth and prepare your palate for the second sip. If you start gulping right away, you’ll risk shocking

your taste buds and ruining your whiskey experience.

Tone down a woody-tasting whiskey with an ice cube or two. The water will lessen the intensity of the oaky flavor. On the flip side, try your whiskey neat if you prefer something at room temperature with a lot of smoky undertones.

Whiskey shots (in moderation) can be equally good as sipping, but for shots you might consider choosing a flavored whiskey like Midnight Moon Apple Pie for smoother sailing down your gullet.

Whiskey Dos and Don’ts
Do: Order a single or a double of whiskey. Singles are 1.25 oz. and doubles are 2 oz.
Don’t: Order by one or two “fingers.” Bartenders are all about precision pours and no two bartenders have the same size fingers; if you ask for two fingers, you’ll be asked if you want either a single or a double.

Do: Look at all your options when picking a whiskey.
Don’t: Consider ordering a whiskey because it says “craft,” or you think it’s “top shelf,” so it has to be good. Wild Turkey whiskeys have won blind tasting contests at Old Hickory Whiskey Bar, and Wild Turkey products are often considered “bottom shelf.” Great taste can come at great value.

Do: Try a whiskey in a cocktail.
Don’t: Avoid whiskey because you’re intimidated by the “harsh” taste. With cocktails like Whiskey Sours and Bourbon Sidecars, you won’t believe what you’re drinking has whiskey in it.