The Wine Bar, located on Palafox Street revealed a unique set of murals in honor all of the amazing aspects the area has to offer. Downtown Pensacola has been the place to celebrate any special occasion. These murals represent the colorful and meaningful moments that may have slipped the city’s memory. Each mural depicts an event or scene that is prominent to the city: Seafood Festival, Mardi Gras Parade, the Gulf Coast Arts Festival, Greek Festival, and the Blue Angels. 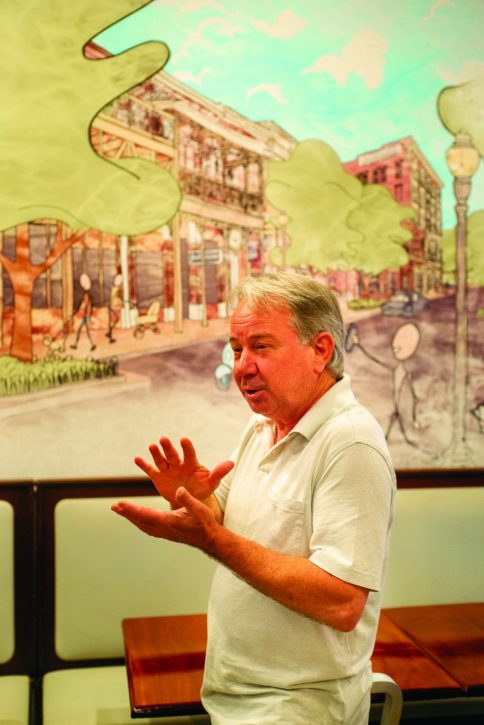 Homer Jolly is the master behind the art and has been living in Pensacola since 2000. His artistic vision began in New York as a designer for King Features Syndicate of the Hearst Corporation. Eventually, he worked his way up to Director of Advertising and Public relations for Hearst Entertainment.

Throughout his career, Jolly has provided marketing design and illustrations to a wide variety of industries. Some of his clients include ESPN, Sports Illustrated, Hennessy, John Deer, Burger King, and WNBC New York. In 2014, Jolly was picked to be the lead designer on the Alabama Gulf Coast Zoo. He was a part of researching the blueprints for a mid-size attraction, laying out all of the habitats and buildings.

Because events like Gallery Night, Pensacola Beach Pride weekend, and the Foo Festival were canceled due to COVID-19, many businesses like the Wine Bar had to create strategies to draw in more customers. The Wine Bar made several renovations just before restaurants and bars were able to reopen.

Jolly explained how important it was to reveal these murals once businesses reopened. “We redid the whole inside while it was shut down, so we rushed into it and started redoing everything,” Jolly said. “When they announced restaurants to open back up, we were ready more than ever. They came in and redid all of the tables so they’re fresh and bright.” The vibrant colors in the art light up the surrounding area. Each design aesthetically compliments each other and stretches across the whole inside building. 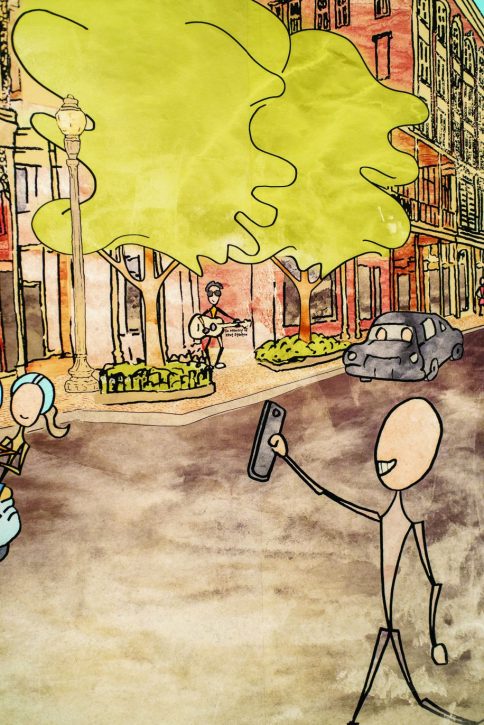 The idea of the stick figures is to create emphasis on the surrounding scene, not the person. Jolly decided to create these stick figures to depict the beauty behind the people. It showcases Pensacola in a unique and artistic way.

His motivation behind the murals was to attract people to the restaurant and spark conversation about the cheerful events in Pensacola. The murals showcase many events like the Seafood Festival, which is three day event in September. “We wanted to celebrate Palafox,” Jolly said. “We also wanted to make it whimsical and remind people of what Pensacola has to offer.”

Out of all of the murals, Jolly talks about why the Blue Angels flying over Pensacola is his favorite piece. “My favorite canvas was the Blue Angels because it shows the Saenger Theater, which is one of the great places here,” Jolly said. The Blue Angels are a pivotal piece of Pensacola history and have been around since 1946 in honor of the United States Navy and Marine Corps.

The main mural located inside the restaurant sets the tone of the Wine Bar and illustrates the beauty of the building, as well as a tribute to Kent Stanton.

“Stanton was a well-known musician who passed away recently, and we wanted to respect him,” Jolly said. Stanton became an icon for downtown life and everyone looked forward to listening to his music. He played his guitar on Palafox regularly for decades and even sung original songs. Unfortunately on April 26, 2020, Stanton died suddenly in his sleep. He was a local legend and will live on forever. 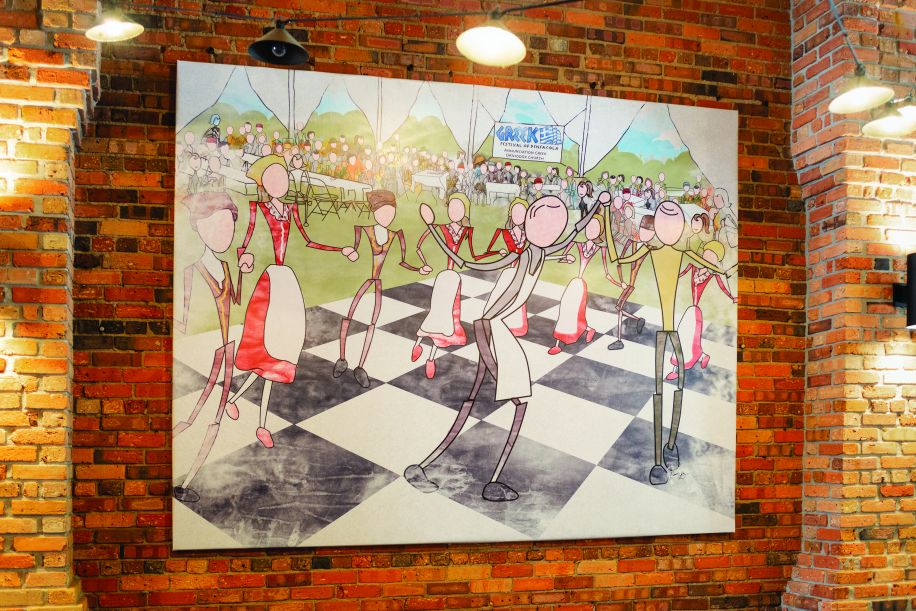 Jolly explains the process of designing these murals. “I went out and took the photos and created my perspective. I took a piece of tracing paper and traced it on my big screen,” Jolly said. “I had three pieces of tracing paper for each one. Finally I scanned those and used that as the line art. I do all the coloring in photoshop.”

As you approach the Wine Bar it will be hard not to notice these beautiful designs. “The outside murals took about three days a piece to make and the main mural took three weeks,” Jolly said.

In light of the golden summer season, these murals add nostalgia to downtown Pensacola and remind people of all the good that goes on around them. “I think people will start identifying with the events on the murals and remind them of what is going on down here,” Jolly said.

Come and visit the Wine Bar, open seven days a week, and enjoy the beautiful art. While you’re at it, enjoy a glass of wine while talking about the good ole times and the many more to come.